AVANT ACOUSTICS looks out for the owner’s best interests with our in-depth system commissioning services. What does that really mean?

System commissioning has a major impact on the performance of audio and video systems.  For simplicity, this blog post primarily focuses on the audio systems.

Who wins with in-depth system commissioning?

AVANT’s system commissioning typically requires tiring long days onsite.  We test most every facet of the system and equalize the system to provide natural sound with maximum speech intelligibility.

Delivering simple punch-list style commissioning would require less effort (we think that’s why others use this method). However, in our experience, projects sound and work significantly better because of our intensive approach.  That’s why we put clients’ needs ahead of our own bottom line.

How does AVANT’s commissioning improve the sound of the system?

AVANT ACOUSTICS’ testing finds things like improperly wired, rattling, or dead loudspeakers.  If your room has many loudspeakers in an array, you may notice something is not quite right, but not know why.  The system may even sound “fine” to the untrained ear.  If that was ideal, however, that is how we would’ve designed the system.  It sounds so much better when each component is working properly.  This part of the commissioning is primarily science. 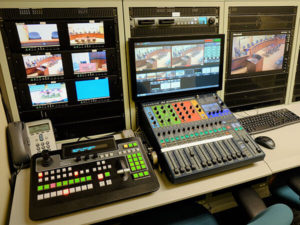 Testing a broadcast system at the Johnson County Board of County Commissioners.

Next comes the art of commissioning: equalization.  This involves separate tuning for each input (especially microphones) and each output (loudspeakers) to make different models sound as similar as possible to one another.  We also use a professional-grade analyzer to ensure an appropriate response from the system.

We then listen to tracks of speech and music that we’ve heard hundreds (if not thousands) of times on various systems to further improve the equalization.  A coworker then speaks into the microphones.  Because of our familiarity with their natural voice, we can fine tune the speech intelligibility and natural sound.  Lastly, using specialized filters and gain control, we minimize the likelihood of feedback and amplifier clipping.

The result is a better sounding overall system with predictable and reliable performance.  AVANT ACOUSTICS ensures owners’ get what they paid for.  We find our proven process works better every time, even if others have been trained to provide this service.

How does AVANT’s system commissioning improve how well the system works?

While onsite, AVANT staff tests and visually inspects nearly every component and wire in the system.  Each project has different issues. It could be… 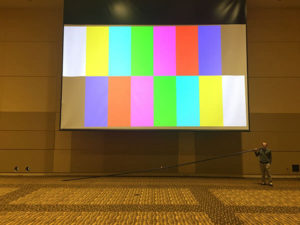 Andrew evaluating a projector screen problem at a conference center.

Some of these issues may go unnoticed for months, until the first time that particular function or path is used… or worse, for over a year when the system is no longer under warranty.  Some great installers thoroughly test their systems, but inevitably, we find issues that still need resolved.  As one contractor, we’re currently working with, so eloquently stated: “A second set of eyes is always a good idea.”

Surely there’s more to it than this… AVANT spends hours on project sites!

You’re right!  Projects typically require between a couple of days to several weeks of system commissioning, depending on size and complexity.  There’s no way we could mention everything we do and check for here.

Just this year, there were two projects where we were not contracted to do system commissioning.  The owners’ representatives contacted us in each case.  They were frustrated with the end result, and asked us to come onsite and make things work as intended.  For obvious reasons, this was not an ideal path for those owners.

Does AVANT have any anecdotal evidence of the importance of commissioning?

Of course we do!  We won’t mention any “proper names” here, as our goal isn’t to make anyone look bad. As we mentioned previously, every project benefits from our expertise!

In this project, our “punch list” (which is what we call items that need corrected by the contractor prior to our next visit) included 41 items, some of which were multi-part.

Some major examples?  The touchpanels were not providing all of the required functions. A missing jumper on an audio signal to avoid premature failure or potential sound quality issues from the CD player. Loudspeakers were improperly tapped causing several speakers to be “quieter” than designed. The microphones were the incorrect model. Some loudspeakers didn’t even work.

This project had a great AV contractor, so the “punch list” was shorter with only 24 items.  Some major examples of deficiencies included missing portable equipment, malfunctioning monitors, and digital signage displays that were installed incorrectly for portrait mode.

This relatively simple project had 12 items on the “punch list”.  Some major examples were a malfunctioning video system, missing portable equipment, incorrect labeling of buttons, and an incompatible (with other system components) Ethernet switch.

What does all of this mean?

You’ve made a great decision in hiring the audio-visual professionals at AVANT ACOUSTICS to enhance the experience of your space. You have invested in an AV system designed based on your needs and wants.  The estimates provided during each step of the project included commissioning services, so let AVANT ensure that system works as designed on opening day and beyond!

What Our Clients Say

"AVANT ACOUSTICS has always been a bright spot on our design teams. Their professional approach to acoustics and audiovisual communications incorporate all aspects of the architecture and interior design."
- Morgan Rhys Williams, AIA, Principal, HOK